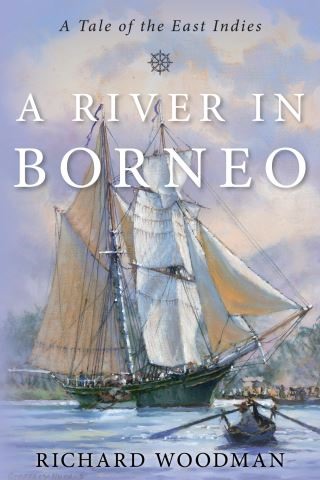 A River in Borneo

A Tale of the East Indies

Richard Woodman: Captain Richard Martin Woodman retired in 1997 from a 37-year nautical caree. Woodman's Nathaniel Drinkwater e series is often compared to the work of the late Patrick O'Brian. Unlike many other modern naval historical novelists, such as C.S. Forester or O'Brian, he has served afloat. He went to sea at the age of sixteen as an indentured midshipman and has spent eleven years in command. His experience ranges from cargo-liners to ocean weather ships and specialist support vessels as well as yachts, square-riggers, and trawlers. Said Lloyd's List of his work: "As always, Richard Woodman's story is closely based on actual historical events All this we have come to expect --and he adds that special ambience of colourful credibility which makes his nautical novels such rattling good reads."|||

Captain Richard Martin Woodman, an English novelist and naval historian, retired in 1997 from a thirty-seven-year maritime career to write fulltime. The author of fourteen Nathaniel Drinkwater novels, two shorter series and several standalone novels, he also has written a range of factual books about the eighteenth century and World War II history.