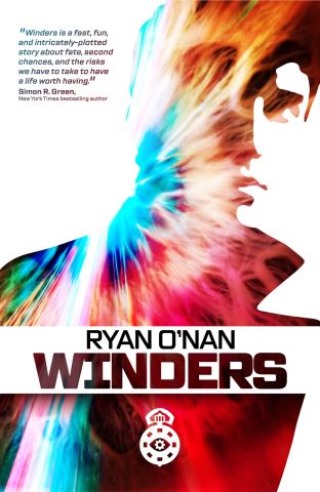 In this stunning debut by actor and screenwriter Ryan O’Nan (Skins, Marvel’s Legion, Queen of the South), time itself can be wound back like a clock. The power of Winding can fix mistakes and prevent disasters. Or, in the wrong hands, it can be used as a weapon against the world…

Juniper Trask is a prodigy, raised under the Council’s strict Code, which allows Winders to exist in secret among average humans. After the shocking murder of her mentor, she is chosen to take his seat on the Council. But as Juniper settles into her new role, cracks of dissension are forming around her, and she uncovers the dark truth behind their power. Juniper has just become a pawn in a game no one knows is being played, and as she begins to question the Code for the first time, her life spirals into a world of danger.

Charlie Ryan always knew he was different, ever since he saved his mother from a horrible car wreck that no one but him remembers. After meeting a mysterious man who claims he has the same ability, Charlie leaves home to chase him for answers. But the world Charlie’s stepped into is more dangerous than he could have imagined. Charlie’s powers are special, and there are those who would kill to get their hands on him.

Now, Juniper and Charlie need each other if they are going to survive the future—no matter which future that may be…

Praise for Winders
"Winders is a Tenet meets The Matrix thrill ride that I could not put down. O'Nan is a rare talent, transitioning seamlessly from script to prose with vibrant characters, addictive world-building, and a story that leaps off the page and onto the screen." — Gretchen McNeil, author of Ten, #murdertrending, and Get Even

"Winders is a fast, fun, and intricately-plotted story about fate, second chances, and the risks we have to take to have a life worth having." — Simon R. Green, New York Times bestselling author

"Calling Winders an exceptional debut would be doing it a disservice. It’s more than that; it’s an excellent book." — Michael Mammay, national bestselling author of Colonyside

“An exciting debut from O’Nan: fast-paced action and dangerous conspiracies that will leave you impatient for book two.” — Jim C. Hines, author of Libriomancer

Ryan O'Nan: Ryan O’Nan is an award-winning screenwriter, actor and director. He has written on such series as Marvel’s Legion on FX, as well as the edgy teenage drama Skins, Queen of the South on USA, and Wu-Tang: An American Saga on Hulu. Currently, Ryan writes and produces on Big Sky on ABC. On the film side, he wrote/directed the hit indie film Brooklyn Brothers Beat the Best, which was released theatrically by Adam Yauch’s (Beastie Boys) company Oscilloscope Laboratories, where it received several awards. Ryan has been featured in both Filmmaker Magazine and Creative Screenwriting Magazine. As an actor, Ryan is best known for playing King George on the series Queen of the South. Ryan lives in Los Angeles, California with his wife and three cats: Bosco Beanbag, Fantine the Bean, and Amelia Wolfman. Winders is Ryan’s debut novel.