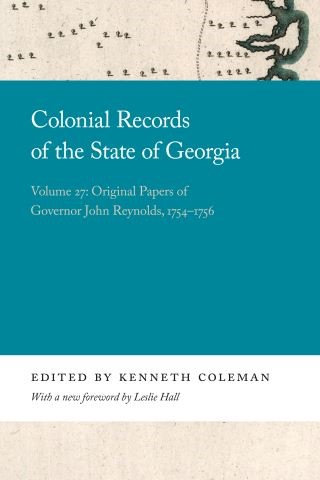 Colonial Records of the State of Georgia

The Colonial Records of the State of Georgia document the colony through its first twenty-five years and includes correspondence between Georgia founder James Oglethorpe and the Trustees for Establishing the Colony, as well as records pertaining to land grants; agreements and interactions with Indigenous peoples; the settlement of a small Jewish community and the Salzburgers, German-speaking Protestant refugees; and the removal of restrictions on land tenure, rum, and slavery in the colony.

Most of the local records of colonial Georgia were destroyed during the Revolution. Under Governor James Wright’s direction, merchant John Graham loaded much of the official records on his vessel in the Savannah River. During the Battle of the Rice Boats in March 1776, the Inverness was burned while it lay at anchor. The destructive civil war that occurred in the latter phases of the Revolution resulted in further destruction. The Colonial Records of the State of Georgia, drawn from archival material in Great Britain, remain a unique source.

Volume 27, spanning the years 1754–56, contains the papers of Georgia’s first governor, John Reynolds, as well as the correspondence of various inhabitants.